You are here: Home / Clergy & Staff

The Rev. Mary B. Gregorius
Rector 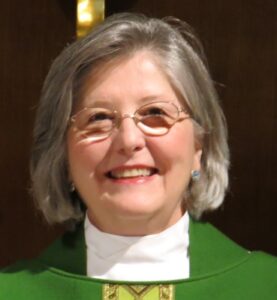 Mother Mary+ joined the spiritual journey of St. John’s Episcopal Church in late July 2012, after having served as chaplain both in Westchester and Dutchess County hospitals for 15 years and at the World Trade Center Disaster site in 2001-2002.

Prior to receiving her call to St. John’s, Mother Mary+ served at St. Margaret’s in Staatsburg, NY, St. John’s in the Village, NY, and Christ Church, Poughkeepsie, NY. In life before ordination, Mother Mary+ was deeply involved in church music, both performing in and leading choirs in the greater Poughkeepsie area. As well as in the contracting business as a Kitchen Designer and Project Manager. 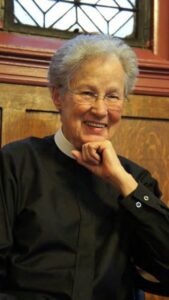 Deacon Lynn started her career as a Registered Nurse, and spent 20 years at Mt. Vernon Hospital, 10 of which were as Director of Nursing. She then became Vice President of Patient Care Services at Griffin Hospital in Connecticut, a post she held for 14 years.

In 1994, Lynn was ordained into the Diaconate and was assigned to St. Thomas’ in Mamaroneck, where she served for 20 years. During her time at St. Thomas’ she initiated a Feeding Program, coordinated Monthly Community Dinners, the Pumpkin Patch, and supervised the Thrift Shop. In addition, her mission work included working with Appalachian Rebuilding in Kentucky, trips to New Orleans to help with the rebuilding after Hurricane Katrina, four Pilgrimages to Tanzania in support of the Carpenter’s Kids, and two Pilgrimages to the Holy Land.

On the Diocesan level, she has served on the Episcopal Charities Advisory Committee, and the Commission of Ministry, and has been involved in the Diocesan Indaba Program.

Megan Whalen began working with Episcopal Churches in 2012. She started as a Sunday School teacher and evolved into the Sunday School and Middle School Youth Group director – which she still is today at Church of the Good Shepherd. Megan embarked on her bookkeeping career with the Episcopal Church in 2017 and became bookkeeper at St. John’s in 2019. She also does the books at Holy Communion in Mahopac and Good Shepherd in Granite Springs. Megan took on St. John’s Parish Administrator tasks in 2021.

On a weekly basis Megan works with the treasurer to keep the church financials in order. She sends weekly parish emails, works on the Sunday Bulletins, manages the Parish Hall rentals, updates the website and helps with any other Administrative tasks. Megan is a graduate of the University of Notre Dame and Columbia Teachers College. She has three children and loves working with St. Johns!